COFFEE: This Year Summer Hit Is Here And Its Hot Hot Hot!

Coming Out Later in Life

Since 2010, the It Gets Better Project has collected over 60,000 video stories from LGBTQ people and their allies from around the world. Here are some of our favorites from 2017 so far.

Fahim is an actor preaching kindness in working to fight Islamophobia and homophobia in Austria.

Ross Matthews is a popular comedian known for his appearances on RuPaul’s Drag Race, Chelsea Lately, The Tonight Show, and Live from E!. In response to a hateful comment made about him, Ross recorded an empowering video encouraging youth to unapologetically be true to who they are, and to respond to messages of hate with messages of love.

IT GETS BETTER PROJECT

Mayra, a YouTuber from Chile, shared her story about overcoming bullying. The success of her YouTube channel serves as a reminder that it really does get better.

Germany’s Next Top Model will feature two trans constestants, Melina and Giuliana, in the upcoming season. The two catwalked against 50 other contestants to secure their spots, and are sure to bring some fierce competition to the show.

IT GETS BETTER PROJECT

Spanish author, Krysztof Charamsa, wants us all to do three things: to free ourselves from guilt and negativity, find out what it means to be LGBTI, and, finally, be visible.

IT GETS BETTER ESPAÑA

Craving more?! Go to www.itgetsbetter.org, or keep scrolling to learn more about the cool things It Gets Better and its affiliates are doing around the world.

AUSTRIA: Living in Austria and eager to tell your story? Then join ES WIRD BESSER OSTERREICH on March 25 at Breite Gasse 3, 1070 Vienna, Austria to share your story. To learn more, click HERE.

PORTUGAL: Our affiliate, TUDO VAI MELHORAR, partnered with Free Hugs to protest against homophobia in the famous Rua de Santa Catarina. The demonstration was inspired by the story of Barbara and MP, a homosexual couple who were threatened while leaving near the Rua de Santa Catarina. Both returned with blindfolds and gave free hugs to anyone who would say “no” to homophobia.

PARAGUAY: IT GETS BETTER PARAGUAY helped organize the premiere of Ser o no Ser, a queer play written by Hugo Luis Robles. The play explores the masculine world of love, relationships, and guilt, finding the humor and sarcasm in everyday events.

SPAIN: IT GETS BETTER ESPANA launched their new program Alianzas por la Diversidad (AxD), whose main objective is to promote diversity in secondary education institutes. AxD works to empower and train students so that they get the tools necessary to manage their own alliance programs. So cool! 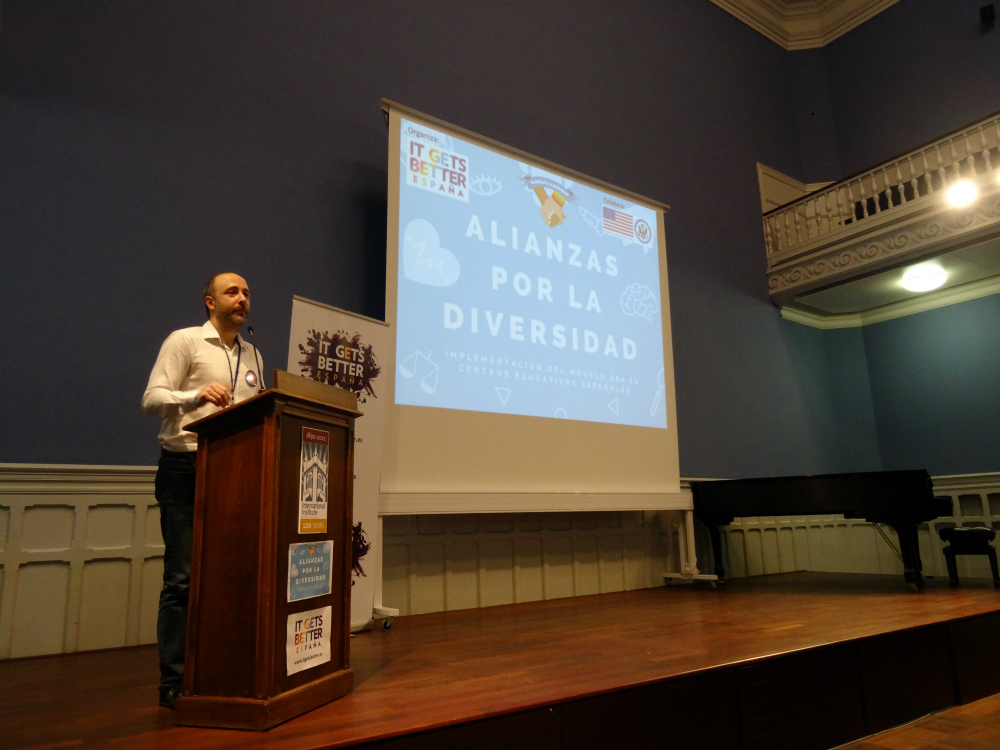 TAKE THE IT GETS BETTER PROJECT PLEDGE:

Everyone deserves to be respected for who they are. I pledge to spread this message to my friends, family and neighbors. I’ll speak up against hate and intolerance whenever I see it, at school and at work. I’ll provide hope for lesbian, gay, bi, trans and other bullied teens by letting them know that “It Gets Better.”

The It Gets Better Project

follow us on moovz
The It Gets Better Project is a nonprofit organization based in Los Angeles, California (www.itgetsbetter.org). With affiliates operating in 16 countries on 4 different continents, It Gets Better boasts a truly global operation. Together, they use the power of story - told through online videos, social media, films, and more - to inspire and empower LGBTQ youth everywhere. So far, over 60,000 It Gets Better videos have been shared.

By: Elizabeth West Mila and Mika were introduced in 2014 by a mutual friend who turned out to have super match-making powers.  On their first outing—to Kreuzberger CSD (or Pride)—they shared a bottle of corner-store sekt, a tin of peanuts, stories of their past, and dreams for the future, as they strolled deeply immersed in […]

Last year we started filming a documentary about an unknown artist called Chris Main who discovered painting whilst homeless on the streets of Central London. In his art, Chris found a remedy for his trauma and a lifeline out of homelessness. The explanation for his circumstance and poor mental health was a tragic and compelling […]

Everybody knows parenting is hard. And everybody also knows that teenagers are a species all their own. Being the parent of a teen can be exhausting, and having your teen come out as non-binary may be the one thing you were never expecting. The initial wave of questions and concerns might overwhelm you, but […]

The LGBT community faces healthcare barriers far too often. From denial of healthcare to ill-informed providers, the inequality of provided healthcare can become catastrophic. Here are some of the biggest healthcare disparities members of the LGBT community still face today: Denial of Healthcare Back in early 2018, the Conscience and Religious Freedom Division (CRFD) was […]

Cicero, Illinois has the highest incidence of HIV in Cook County. This has raised an urgent need for comprehensive programs to be conducted. Integral sexual health education and orientation using a bilingual and bicultural approach to service its multicultural community.  This is precisely what Corazon Community Services has been doing since they open their doors […]

The new summer hit that has made everyone film themselves drinking coffee on social media has arrived! Super Star DJ Sagi Kariv from Tel Aviv and L.A. based Israeli Diva Karina Kay the Israeli Diva did it again! Their new single COFFEE is beating hard on the most popular dance floors this summer. This is […]

“Let’s change hate for LOVE” is Axel Hotel’s new slogan for their most recent video-campaign on their latest opening in America. This stunning and exciting campaign by Axel Hotels brings a totally different version of what history has told us about Europe coming into America. Its main goal is to break up all the misconceptions […]

AGT finalist and vocal powerhouse Brian Justin Crum premiered his new single, “I & U“, yesterday on Huff Post ; out everywhere today. The new track is a follow-up single to ” Circles “, which was released in February.“I & U” was co-written by #1 Billboard writers Melanie Fontana, Lindgren and Ferras, and produced by Lindgren.“‘I & U’ is about the tricks our mind […]

Taiwan has become the first place in the Asian continent to officially legalize same-sex marriage. Thousands of demonstrators gathered outside Parliament on Friday May 17th, where they cheered and waved rainbow flags, despite strong divisions over marriage equality over the last months. Taiwans were more than happy to celebrate IDAHOT 2019 with such a significant […]

It’s a fact! LGBTI people are still being tortured and killed in concentration camps in Chechnya. Moreover, chechen authorities continue to round-up people who they perceive to identify as LGBTI. Several LGBT media sorces such as Moovz and Gay Star News have reported on how people are being detained in concentration camps, tortured in horrific […]

Can you picture yourself on a romatic Italian getaway, and staying at a hotel exclusively thought for the LGBTQ Community but opened for everybody?    The new LGBTQ destination to visit is in Italy, and it happens to be one of its most beautiful cities, Venice. Our friends from Axel Hotels have opened their new […]

U.S. politics is stepping forward more often towards inclusion and diversity within their representatives and candidates. Even though current American political and social rhetoric is spinning around racism and intolerance led by President Trump, the pro-LGBT vote is evident in some American states. This time, lesbian candidate Lori Lightfoot was elected as Mayor of Chicago, […]

For some, coming out was considered easy; some considered it difficult and others nearly impossible or unimaginable. I never realized just how long it took me to come out to my family, 12 years. From the time I realized I was interested in women, to the time I reveled I had a girlfriend, 12 years. I […]

Dido releases her stunning new single “Give You Up”, taken from her first album in five years, ‘Still On My Mind’, out March 8th on BMG.   Incredibly empowering and moving, “Give You Up” was written by Dee Adams and Australian duo The Opposite Kids. “It’s just so perfect,” Dido said of the track. “It’s a good break […]

For all those lovers of high quality circuit & house music, we have big news! It is about the latest music video recently released by fan favorite DJ, Sagi Kariv featuring Karina Kay.   EDM Diva Karina Kay is a Los Angeles based Israeli singer and performer, well known for her unique vocals in some […]

The San Francisco Gay Men’s Chorus has announced that is launching its own LGBTQ Arts Center. The Chorus has taken over a $9.6 M, 1930 art deco building at Valencia Street. It will be the first time that the Chorus will hold a permanent resident. The SF Gay Men’s Chorus is arguably the most famous gay choir in […]

Holiday season is officially over and for some people who haven’t come out to family members, this might have been the end of a few rough and awkward weeks around family. For some, family gatherings and specially holidays can be a drag, uncomfortable, and sometimes soul sucking for the simple fact that you have to […]

“OUTCAST” is VELO’s first Bilingual full-length album.   VELO, a Latinx queer Producer and Artist seen at Gay Pride events throughout the west coast & more, delivers a real Star-Studded follow up to “CRUZIN” with strong club bangers and seamlessly melds Latin Trap elements with Dance to create a fresh and modern sound geared towards […]

LADY GAGA AND BRADLEY COOPER RELEASE VIDEO FOR ‘I’LL NEVER LOVE AGAIN’   Lady Gaga and Bradley Cooper release the official video for A Star Is Born’s “I’ll Never Love Again”   The official motion picture soundtrack to Warner Bros. Pictures, Live Nation Productions and Metro Goldwyn Pictures’ A Star Is Born has debuted at #1 on the Billboard 200 with over 231,000 […]

It’s no secret that condom use among gay and bisexual men has been declining for some time. One of the reasons will be the knowledge, thanks to research, that men who are on a variety of HIV drugs are much less likely to pass the virus on during sex. However, a recent study, published in […]

*Original Post from Project Female They’re young, fierce, and have the law on their side. In almost any conversation (or comment section) about marriage equality or transgender rights, one question always comes up: But what about the children? When it comes to their basic rights to live as young people of diverse sexual orientation, gender […]

Palm Springs native, King Blandon is releasing his debut album next November 1st. One of the album songs titled “Suck It!” is considered a Gay Pride Anthem and it is the leading single off of a 10 track album.  It will debut live on October 28th, at Hunter’s Night Club in Palm Springs. It’s just prior […]

A few months ago, our friends at Axel Hotels invited us to be part of the first LGBTQ cruise in Europe, the Open Sea Cruises x Axel. It will sail along the Mediterranean Sea and when we knew the entertainment on board included shows from RuPaul, Icona Pop, the Vengaboys, Loreen, Kazaky and Eurovision stars […]

In honour of LGBT+ History Month in the USA and with India recently decriminalising homosexuality, Thomas Cook Airlines have decided to create 👉 THE LOVE MAP and share some important research on LGBT history throughout the years.   Around 1000 incredible moments were analyzed – including first Prides around the world – from over 100 countries that […]

Today we celebrate National Coming Out Day 🏳‍🌈 and we are sharing our coming out stories on the newest feature on Moovz, the Moovz Stories.   Those of you who are out and those of you who are not: we see you, we love you, we support you.   It takes bravery to tell the […]